A day trip from Bundoran to Malin Head, Donegal.

The Wild Atlantic Way came calling once again as did Ireland’s most northerly point, so once again it was time for a day trip from Bundoran – this time to Malin Head.

We set off mid morning heading north to Letterkenny and following the Wild Atlantic Way North signs which brought us up the eastern side of Lough Swilly. Offering superb views of the Donegal landscape, we took a detour just before the village of Burt to visit the Grianan of Aileach. This is a stone fort built 800 ft above sea level around 1700 it is believed. On a clear day you can see for miles and into neighbouring counties too. In the Donegal direction, it offers supberb views of the Inch Levels and Wildlife Reserve as well as further afield to Buncrana. 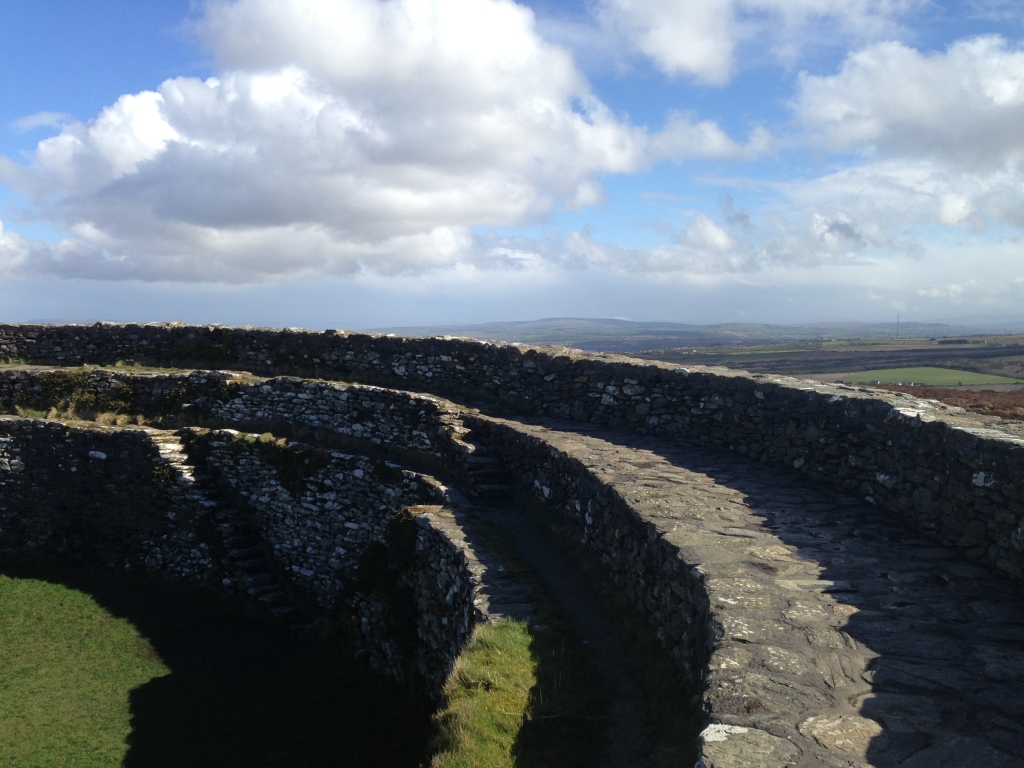 Well on our way…

Back down the hill and on to the main road and just touching the border town of Bridgend before starting the Inishowen 100 which is part of the Wild Atlantic Way. This brought us into Buncrana where we took a quick spin down to the pier where the local RNLI crew have their lifeboat and will soon take delivery of the first Shannon class lifeboat in the country. 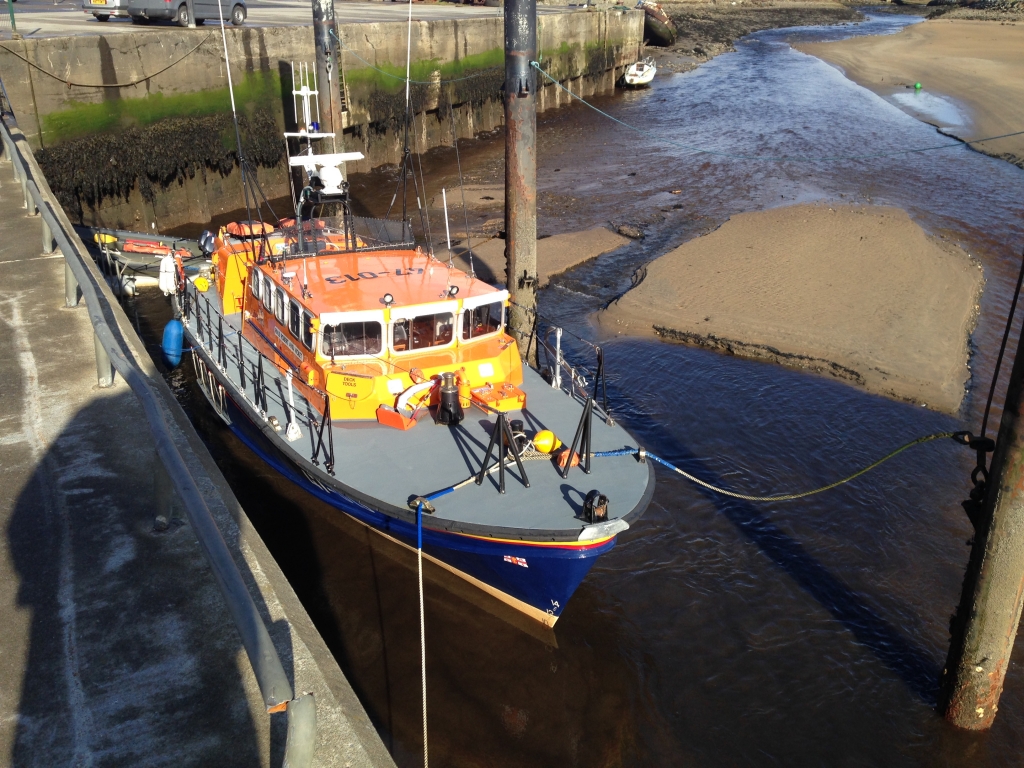 The Road to Nowhere

On leaving Buncrana you have a choice to either go on the main road or continue on some, lets say, “not so main” roads on the Inishowen 100! Being the adventurous types we followed the 100 trail. We were not disappointed. At one point the famous song from Talking Heads came to mind “The Road to Nowhere”. We were surround by mountains and one single road that we knew had to go somewhere. It certainly the element of mystery intriguing us. 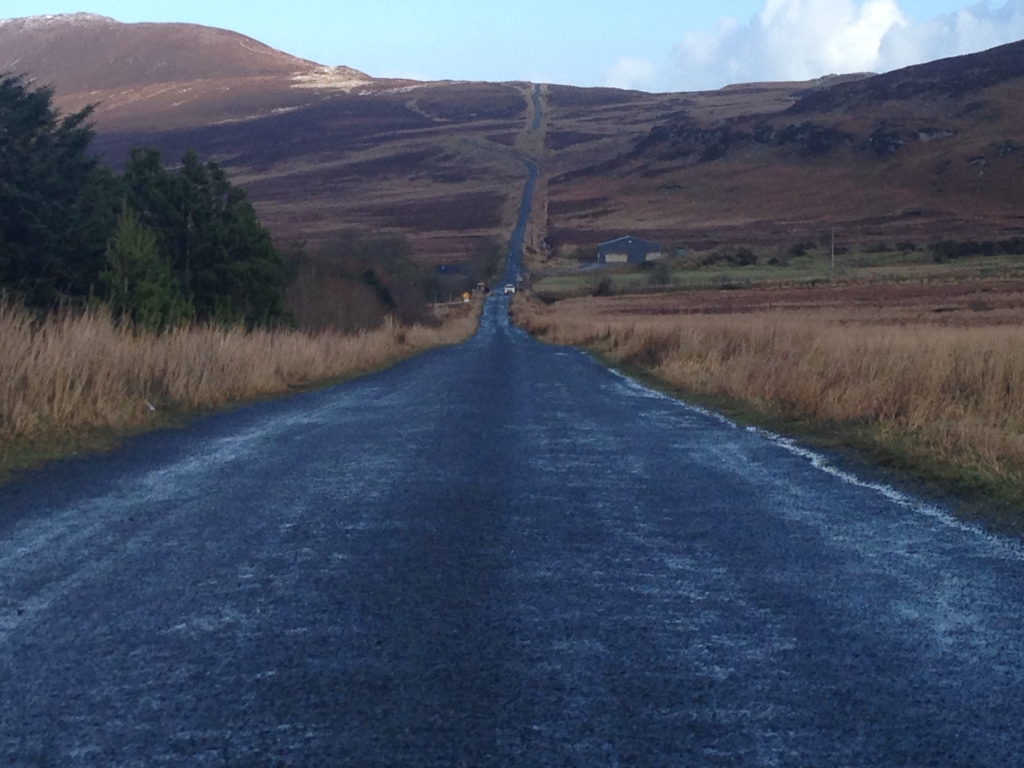 Half way down one “road to nowhere” however, there was another one to the left. This is where the signs brought us and away we went. We’re pretty sure the sheep were saying “not more tourists…”!! 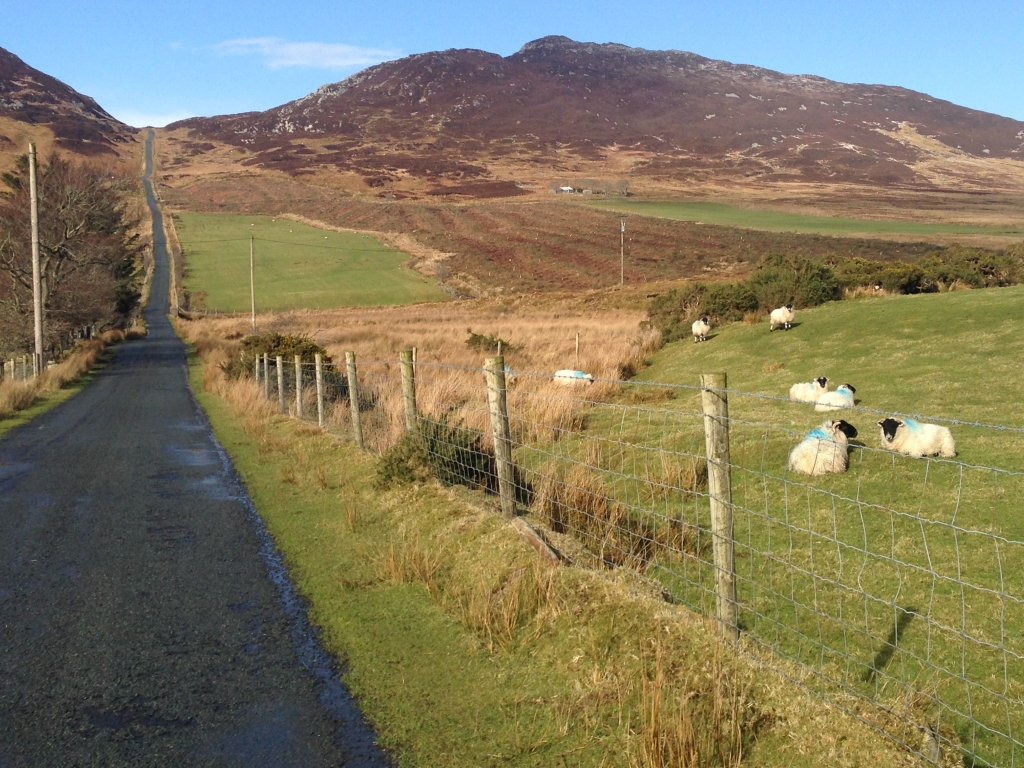 How Sweet The Sound…

At this point we found out that we were leaving Amazing Grace country but of course we stopped for the obligatory photo at the sign – turns out Lough Swilly and the area inspired the man who wrote the famous song of the same name! 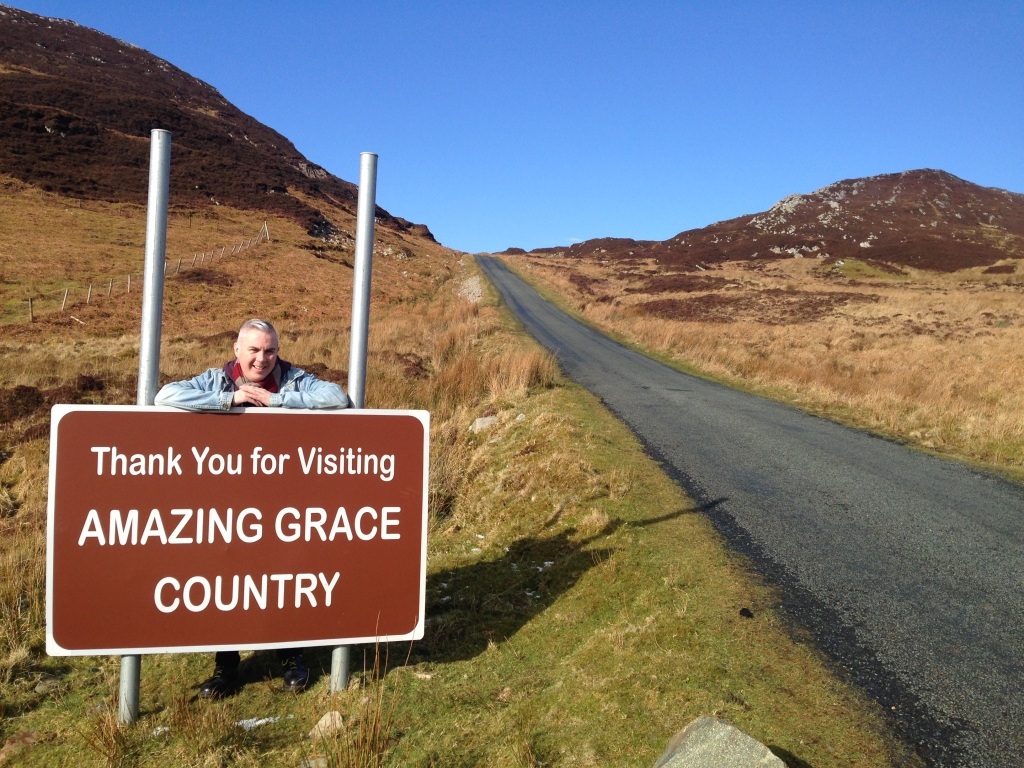 We weren’t really prepared for what lay “around the next corner”. It surely has to be described as another of County Donegal’s “wow” moments! We had come upon the Mamore Gap. The pictures will never do it justice. However I hope it will give some idea as to how lucky we are in Donegal to have such fabulous scenery on our doorstep. 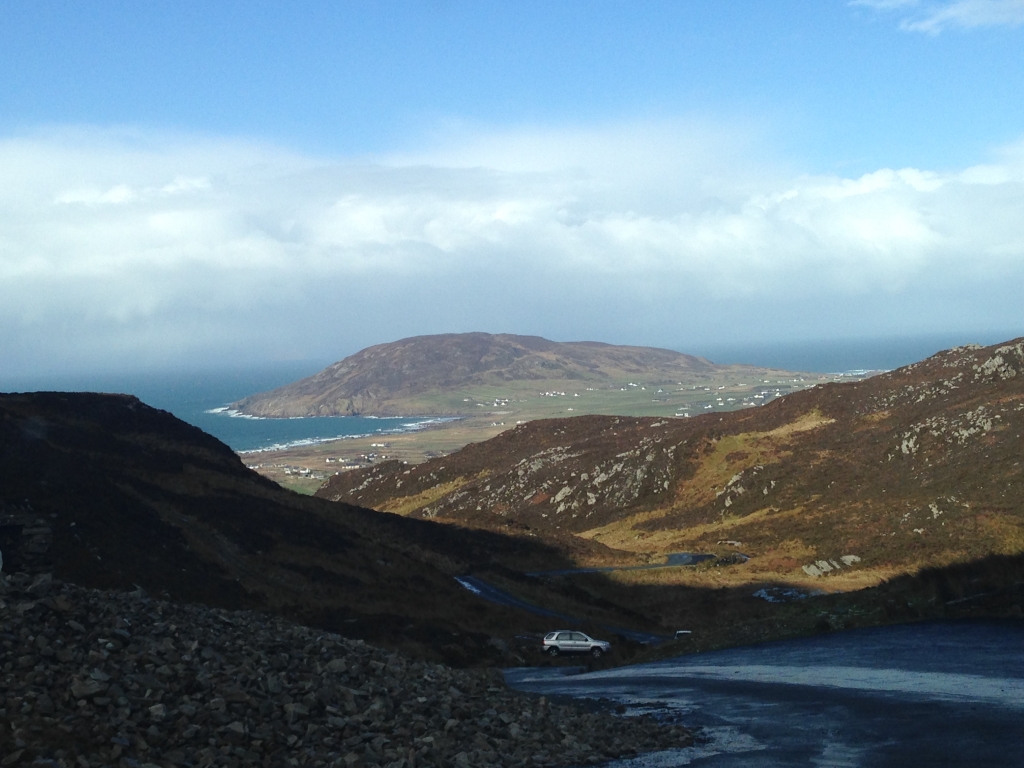 And so our journey to Ireland’s most northerly point continued. As we looked across the lough, as we descended the Mamore Gap, we could see Fanad Head lighthouse. We had been there just 3 weeks previously.   It had been our intention to stop to see the Glenevin Waterfall at Clonmany. However we didn’t realize that it was a 1km walk to actually get to it once you park. We gave it a miss as the hunger pangs had started to hit us! 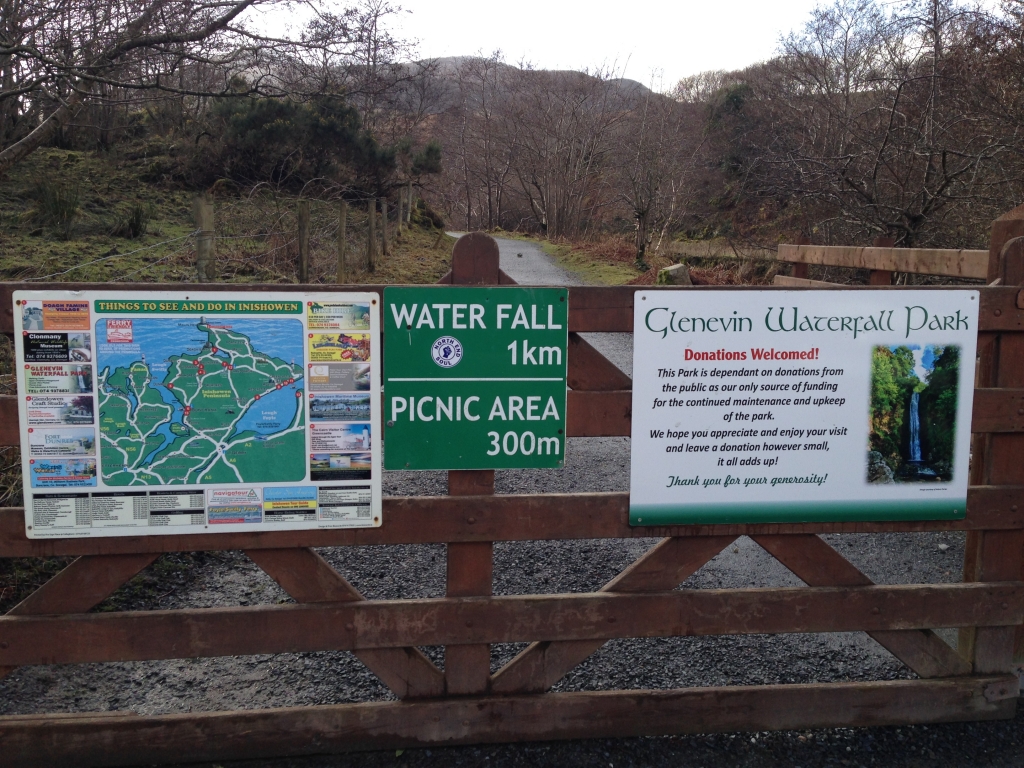 On to Ballyliffin we had a bite to eat at Nancy’s Barn. We then made moves for Carndonagh, Malin Town and eventually Malin Head. 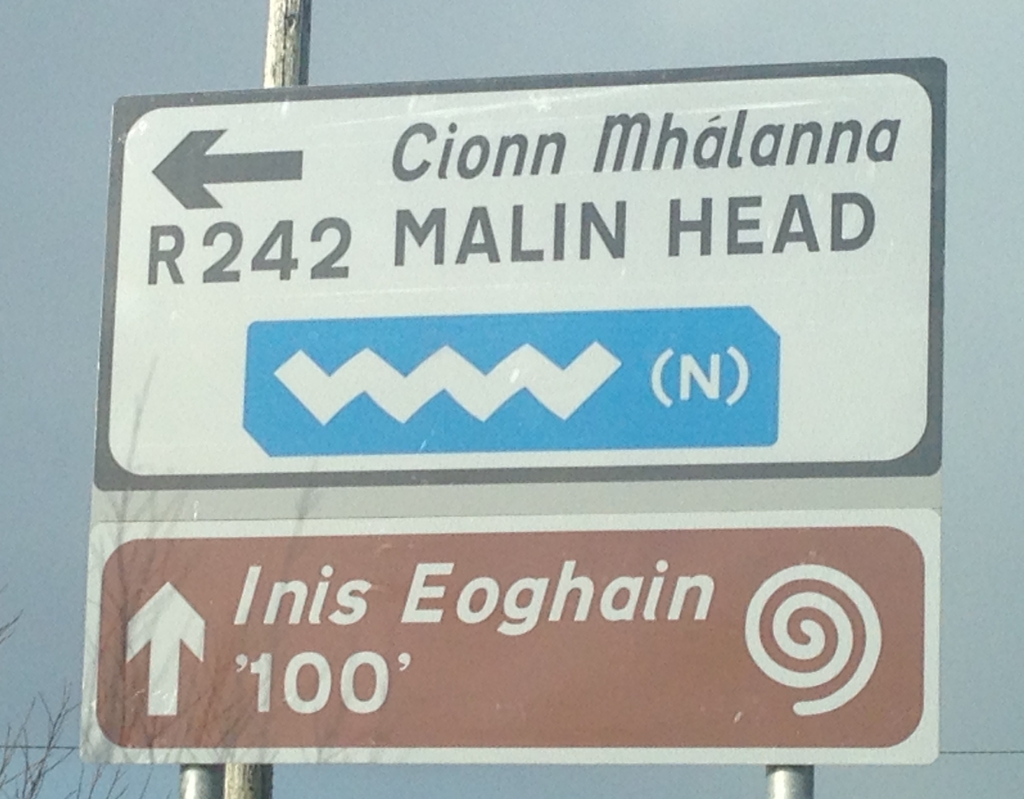 Top Of The Country

Malin Head is famous for being the most northerly point in Ireland. However, it is also famous on weather forecasts and particularly the shipping forecast. It gets mentioned a lot on national radio across Ireland and the UK. Met Eireann have a station there as do the Irish Coast Guard – one of 3 coast guard monitoring stations in the country. The others being at Valentia in Kerry and Leeson Lane, Dublin. Coast Guard communications have been based there for many years. As you start the loop of the head you will see the two large masts as well as the ancillary buildings. 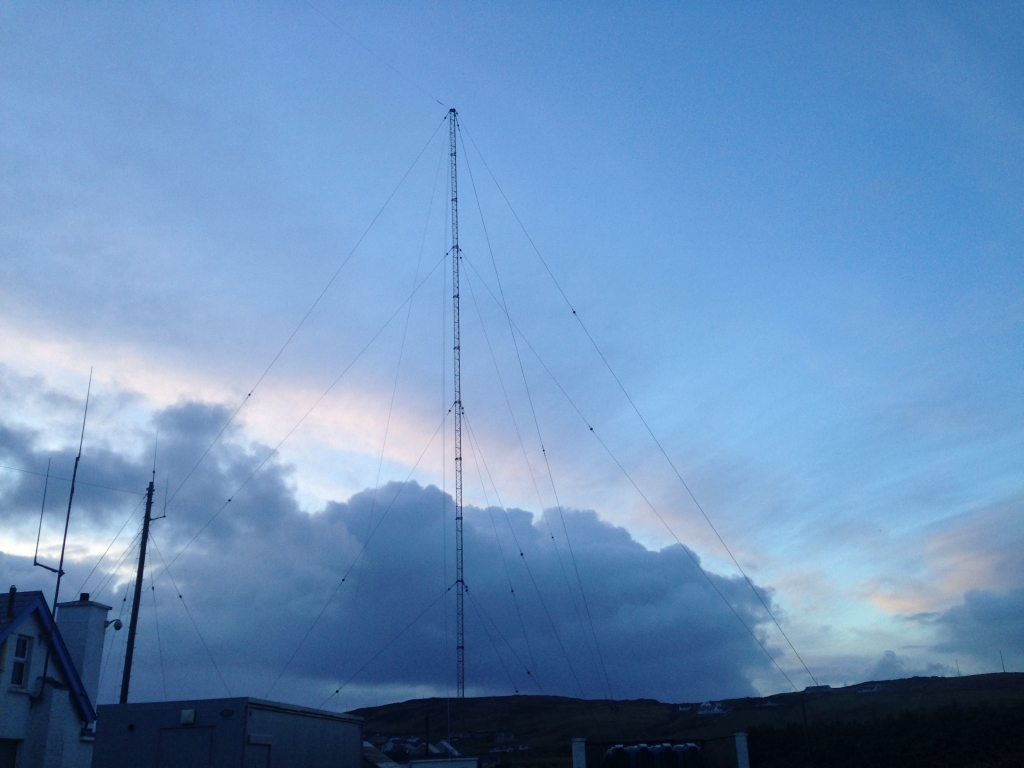 As you do the loop over the headland and prepare to head to Bamba’s Crown, you won’t get much wilder. We went on a February Saturday but I can’t imagine it’s any less wild on a hot summer’s day! As the crow flies north, the next stop is Scotland’s Outer Hebrides! 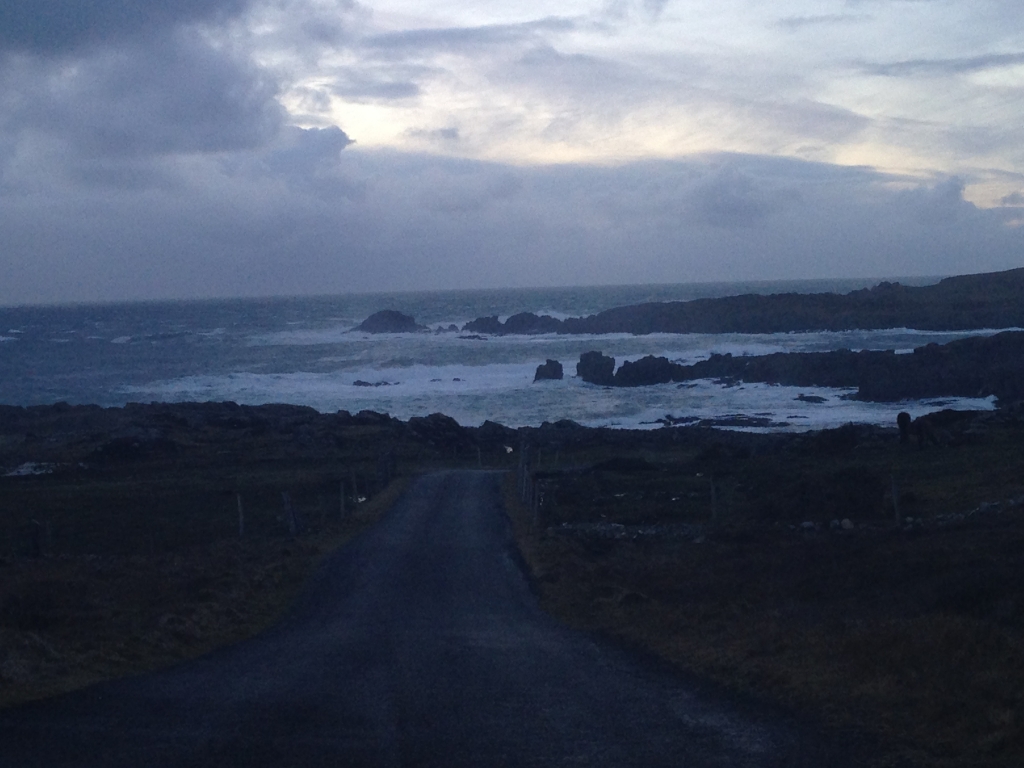 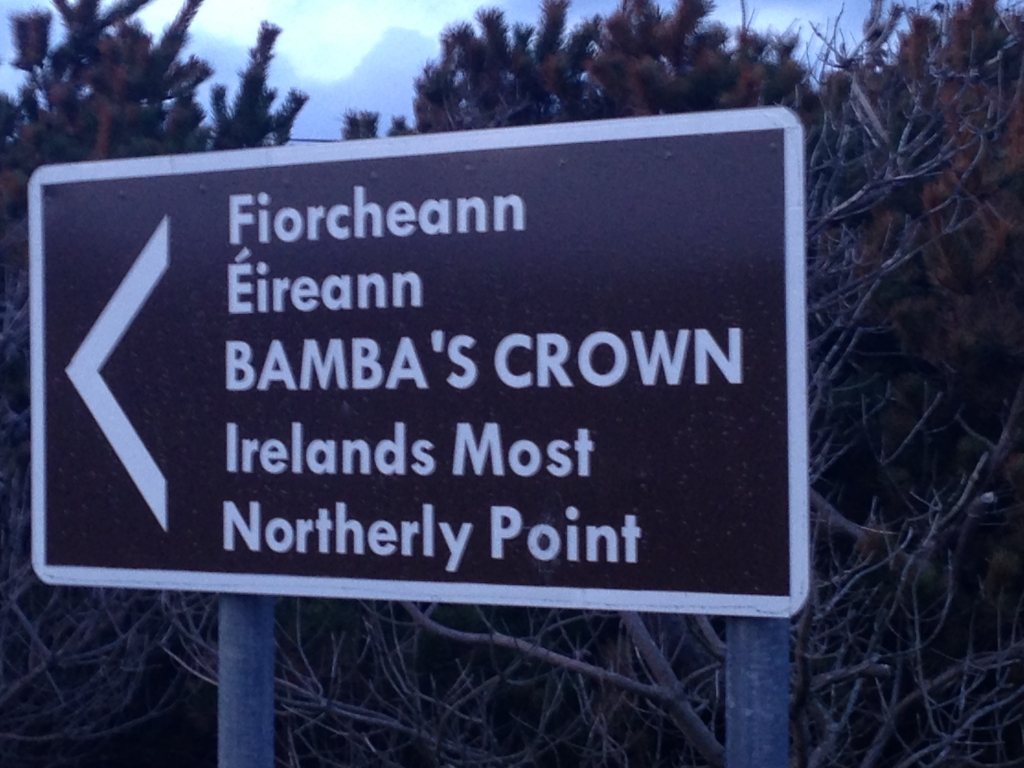 By the time we got to Bamba’s Crown it was beginning to get dark and very windy. This wasn’t stopping the three cars full of tourists. They were already there having a look around and checking in at Ireland’s Most Northerly Point. 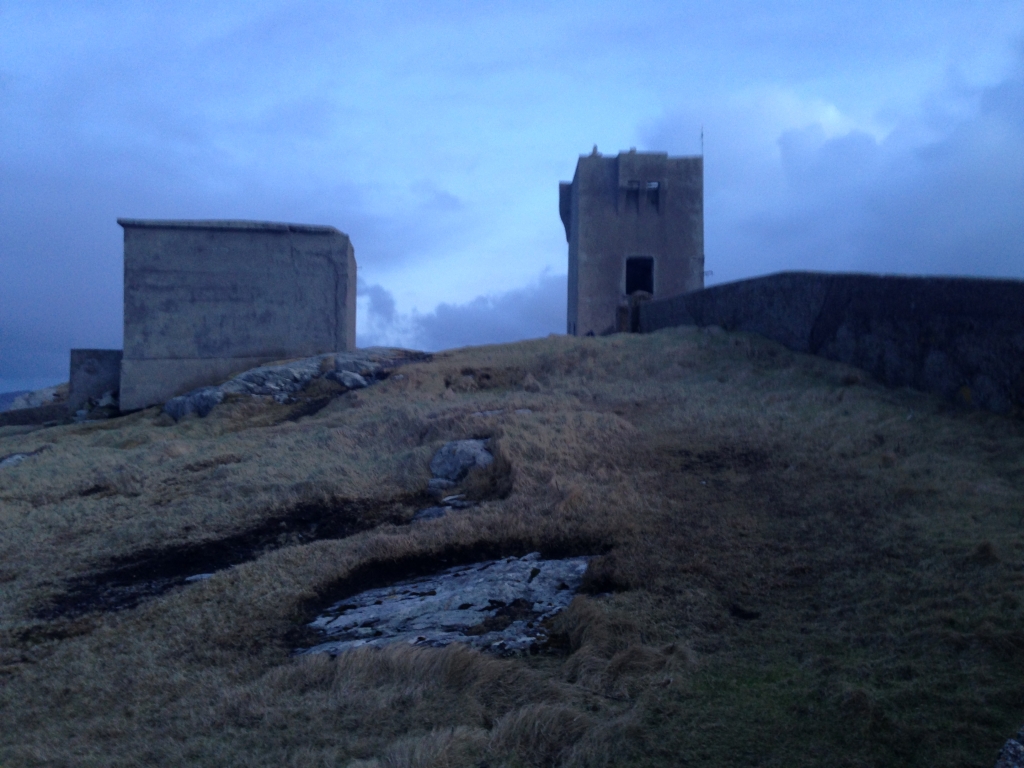 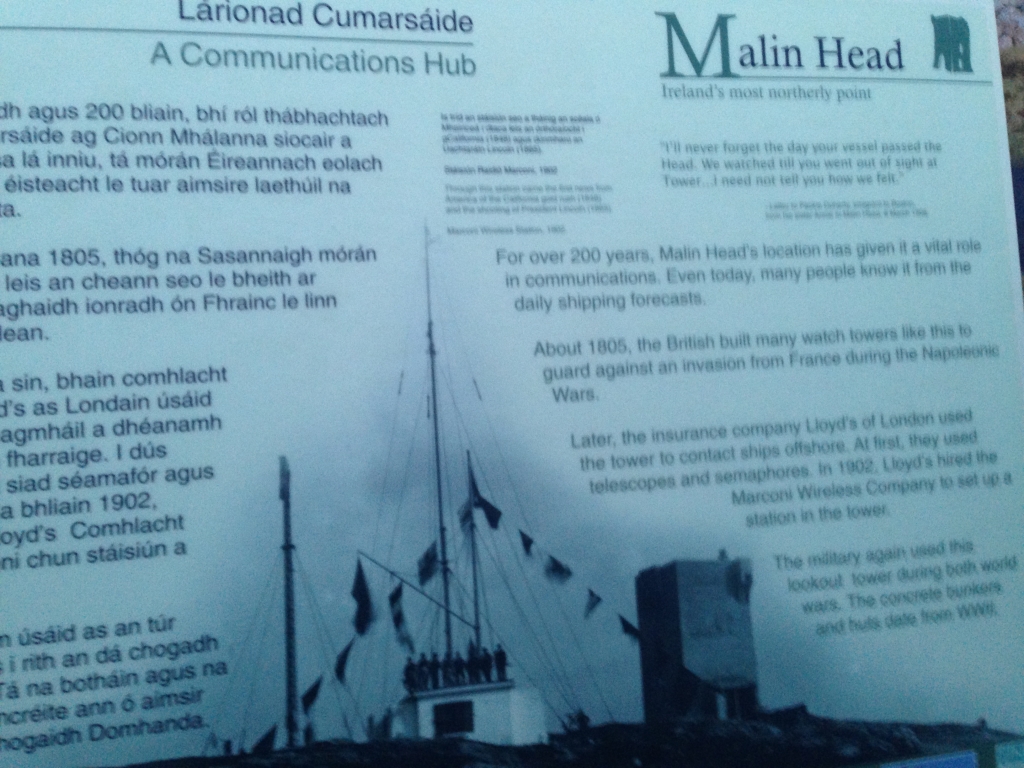 The information panels give some interesting history to the area. While I was on the lookout for the EIRE created in stones in the cliff, all I could see was, also in stones, Donegal for Sam! 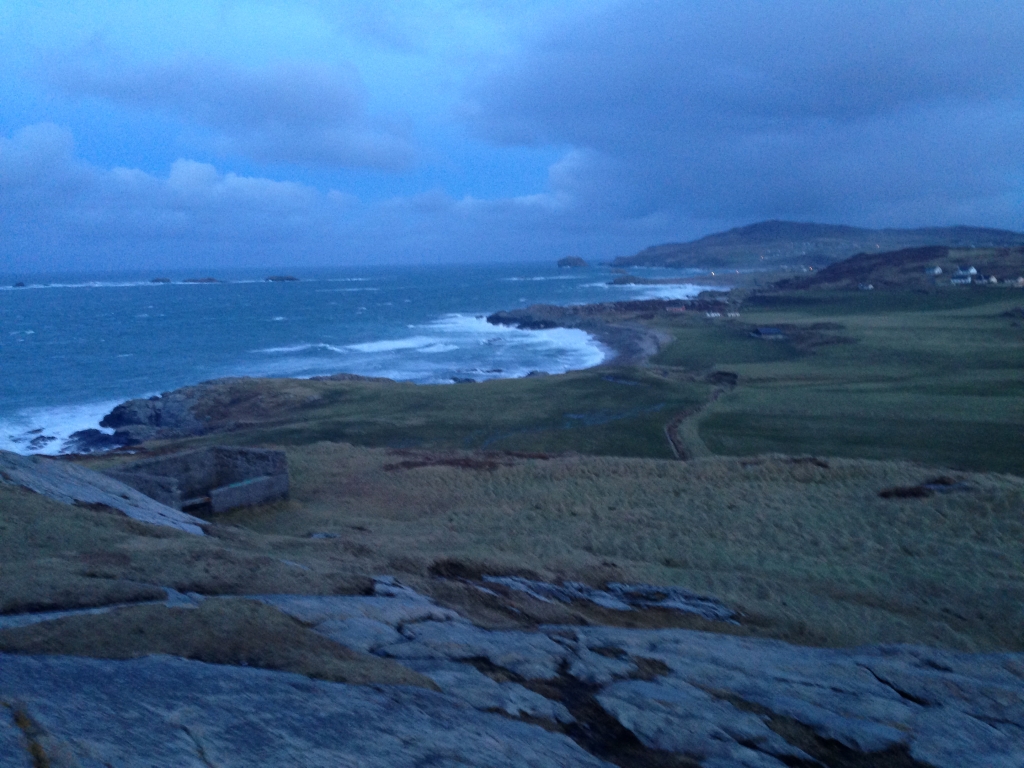 Continuing on the loop we passed the Met Eireann weather station. We then drove down to the small pier for a quick look before setting off south back to Bundoran. We travelled back via Carndonagh, Muff, and touched on Derry before heading back to Bridgend where we stopped to buy some lottery tickets – well it is known as one of Ireland’s luckiest lottery towns after all!!