When I found out that I had a meeting to attend at Fanad Lighthouse I was excited. This would be the third lighthouse that I’d been in in the last few years (Mizen Head & Valentia being the other two).

So our meeting ended and it was tour time. We took the short walk from the visitor centre (with its ample parking) and passed by the Wild Atlantic Way photo marker for the obligatory picture! 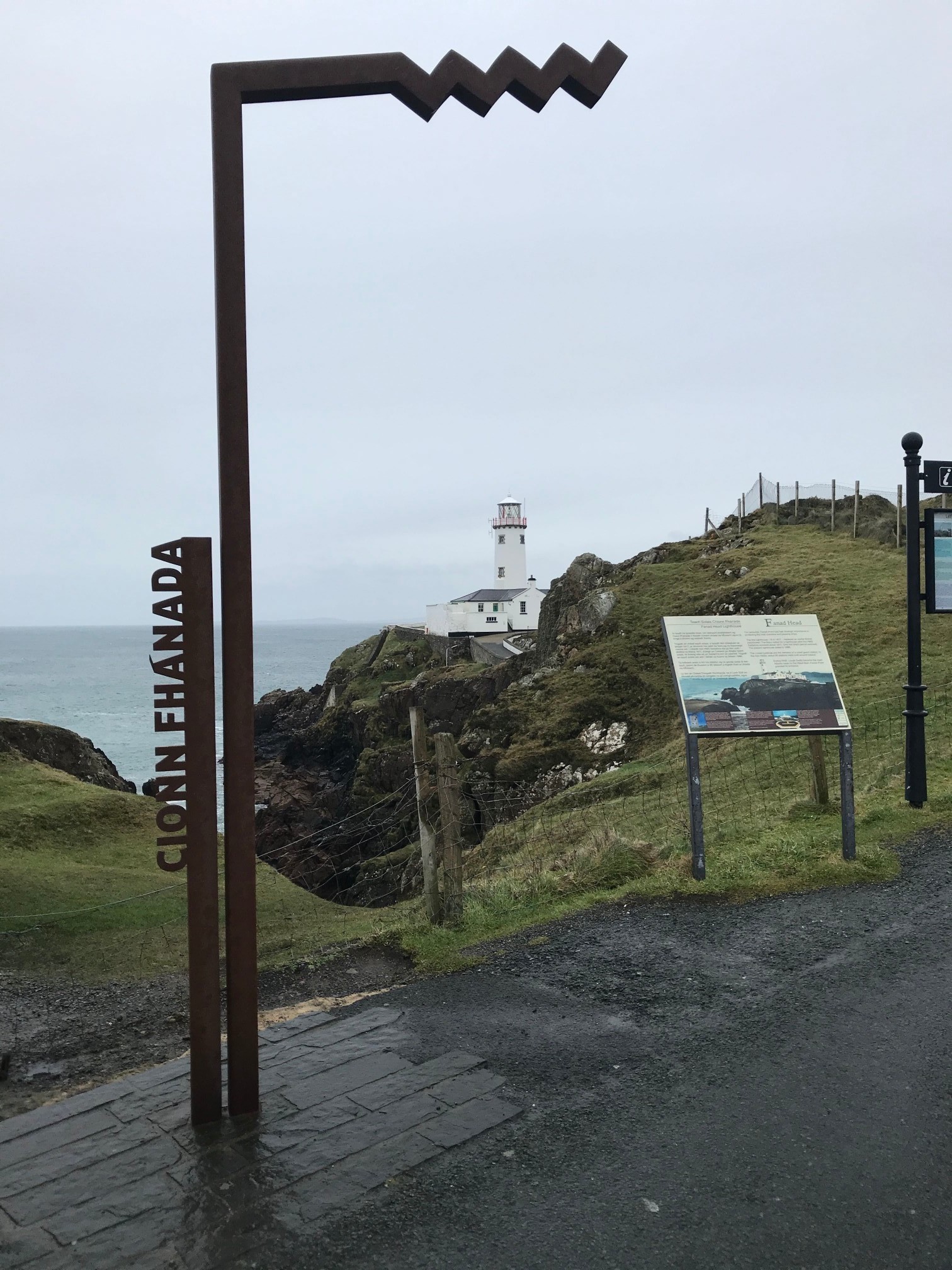 We were met by our tour guide John who gave us a warm welcome and walked us down the path, past the helipad, to the lighthouse which has been in operation and guarding the seas around Inishowen and the entrance to Lough Swilly since St Patrick’s Day (March 17th) 1817.  As we look up at the tower which stands 39 metres above sea level, we notice small cottages at the bottom of the building – left and right of the front door. These are now accommodation for visitors and can be rented for bed and breakfast!

Inside we are introduced to the history of the lighthouse itself which still operates to this day under the control of the Commissioners of Irish Lights (CIL) who look after more than 60 lighthouses around the coast of Ireland.  Ledgers and journals as well as photos of keepers and the building over the years adorn the two reception rooms and we watch a short video on the role of CIL. We are also told about the massive amount of shipwrecks in the area and given a short history of the Laurentic which sank nearby after striking two mines killing 354 of the 475 men on board and losing in the process, 43 tonnes of gold ingots – 20 of which are still missing!

John brings us down the hallway towards the base of the tower. Along the way we are shown a room with a mannequin dressed in the lighthouse keeper’s uniform and some of the old bulbs used to the light the light. Then at the base of the tower, all we could do was look up to see the view in the picture below!

John told us about the flag warning system and also the semaphore guide used almost like sign language. As we ascended up the 79 steps we could hear the wind howling outside the thick walls of the tower. One could only but wonder about the life of the lighthouse keeper back in the day and what a lonely life it must have been (although not as lonely as those stationed on the likes of the Fastnet off the south coast). Keepers at Fanad were connected to the land and not right on the water’s edge.

Half way up we stop to take a look at the live equipment being used to run the lighthouse. It also sends information back to Irish Lights headquarters in Dun Laoghaire in Dublin. Up some very narrow stairs next to the light area. Visitors are not allowed out on the balcony area. We were thankful for this on the day that was in it! Still visibility was quite good. Considering the weather outside, we could see over as far as Malin Head – Ireland’s most northerly point.

John filled us in on more of the history of the lighthouse. We admired the 360 degree view surrounding us as the rain bashed against the windows. The light looks as big as you’d expect. However it’s hard to believe the bulbs used to light it! They shine for miles and let ships know where they are. They’re actually no more than an inch tall! 4 bulbs together create all this light. Amazing!

All in all, this is a really great tour! We had a knowledgable tour guide and some amazing history in this working lighthouse.

You can tour it and also stay there! Check out the details here.

Fanad Lighthouse is one of the Great Lighthouses of Ireland.

Check out my roadtrip to Fanad a few years ago here