With 250 churches, 120 art galleries, 1300 trains arriving in the main train station daily, 8800 animals in the zoo made up of 500 species, Cologne, Germany is nothing if not impressive!

We made a quick visit over St Patrick’s weekend to promote the brand new Ryanair route between Cologne/Bonn Airport and Ireland West Airport twice per week from June 1st 2019.

Arriving via train from Frankfurt, we couldn’t have got more central than the Haupt Bahnhof (Hbf). It’s located right in front of the famous Dom Cathedral. The two distinctive spires are visible from many areas of the city and it’s reportedly Germany’s most visited landmark!

A quick check-in to our hotel – the Dorint am Heumarkt and we took a stroll to get some lunch. We decided to chance our German vocab and tried some sandwiches from the Bakery Merzenich. It had quite the selection of breads.

Even though it’s a city of 1.8 million inhabitants, we were surprised at how busy it was in the centre. Hundreds of people bustled through the streets browsing both local stores and well known international brands. I reluctantly walked past H&M more than once!!

As we had a short time, we decided that the best thing to do to get a feel for the city was to take a city bus tour. These were regular and we got ourselves booked on to the 3pm tour via the tourist information centre. This is right beside the Dom Cathedral. The tour lasted 90 minutes and gave a fairly comprehensive overview of Cologne, which despite being so big is also quite compact! There were 14 stops on the hop on hop off tour, one was at one of the SIX equestrian statues – King Friedrich Wilhelm III by Gustav Blaeser at the Heumarkt. We were also brought to the other side of the Rhine to visit the Lanxess Arena which we were to see lit up in green later that night.

One of the more unusual sights on the tour was a Primark building with a large ice cream cone sticking out of the top of it. A quick google told me that the sculpture was built in 2011 and designed by pop art artist Claes Oldenburg and his wife! 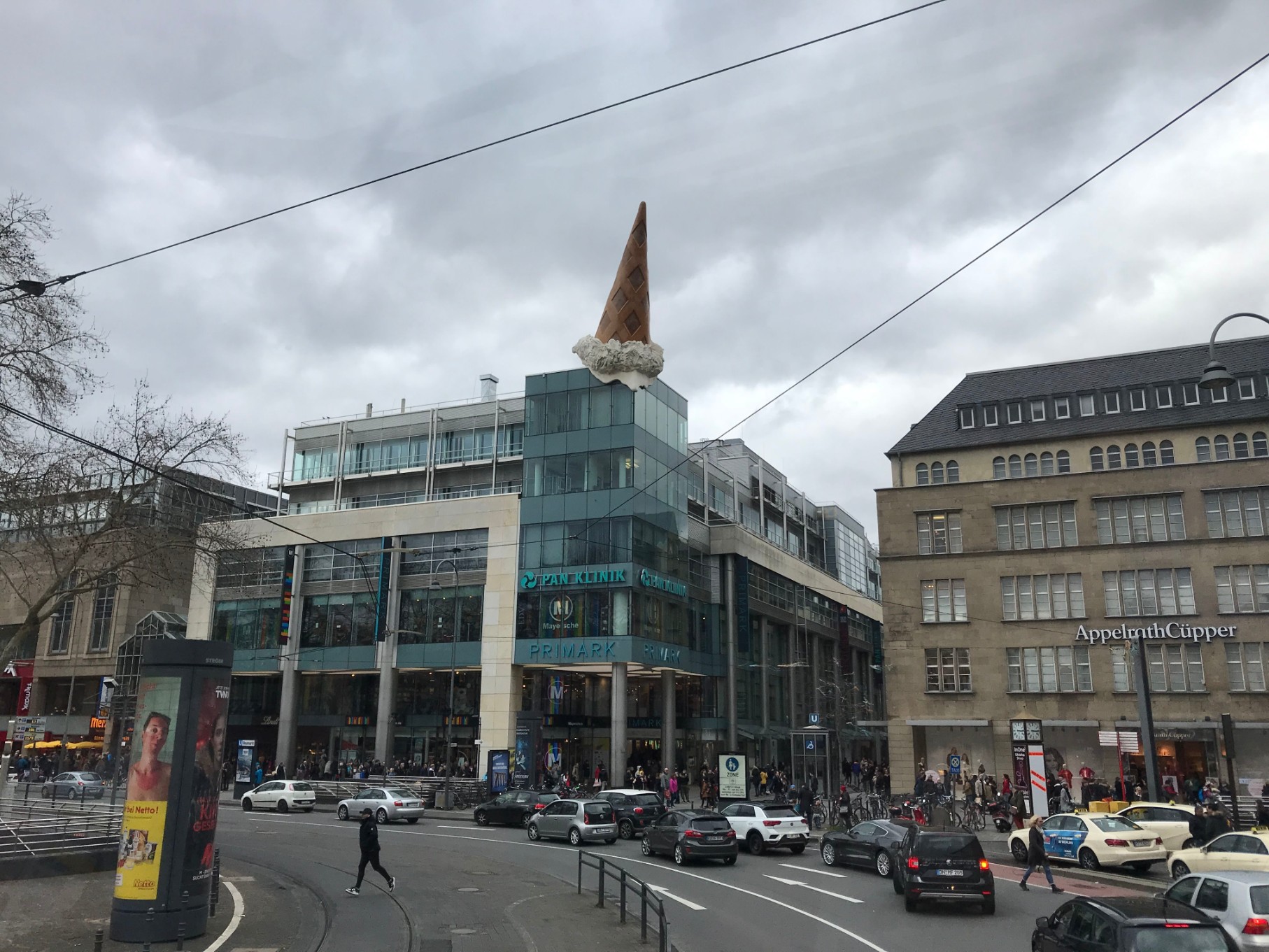 Back to the hotel to sample the local Kolsch beer before getting ready to visit the Lanxess Arena with our Irish colleagues to see part of Tourism Ireland’s Global Greening up close. As we drew closer, the large arch over the venue which had been white earlier, now glowed bright green. There was a sense of pride in all of us as we saw it. The scale of the project taken on each year to “green the globe” is never lost on me. To see more and more landmarks join in annually is a credit to our little country and the impact it has on the world.

Dinner brought us back into the city centre and the Sion Brauhaus which was heaving with people. It must have been sitting a minimum of 500 people at one point when we were there. As they say, when in Rome… so I had the classic Wiener Schnitzel and one (or two) Kolsch :-).

Us Irish wouldn’t be who we are without finding an Irish bar somewhere when we’re out of the country. We made our way to the Corkonian. This was a busy pub showing soccer on one screen and RTE2 on another. Just like being at home! A nightcap at the fashionable “Harry’s New York Bar” within the hotel ended off a pleasant evening.

Sunday morning it was time to head to the airport for our event. Tourism Ireland had arranged for a number of tourism trade from the west and northwest of Ireland to meet with German tour operators and travel agents to tell them what the region has on offer. As it was now St Patrick’s Day we were all wearing some green. We were really looking forward to a taste of home food which had been prepared (and flown) by the lovely ladies of B&B Ireland. Sausages, rashers, brown bread with salmon and more made sure that none of the Irish contingent or our German guests went hungry!!

Following a successful event, we made our way downstairs to the train station. This brought us back into the centre of Cologne in around 20 minutes. Before our next train back to Frankfurt we took the opportunity to take a look into the Dom Cathedral where Sunday mass was underway. It didn’t stop the legion of tourists (myself included!) from filing in to see this amazing building. The construction started in 1248! If the mood takes you, you can pay just €4 to climb the 533 steps to the top of the cathedral… we decided to pass. However, Intrepid Audrey from Ireland West Airport did the honours. You can check out her story on the Ireland West Instagram account here.

Twice weekly flights from Cologne/Bonn Airport to Ireland West Airport Knock with Ryanair commence on June 1st 2019. They will operate on Tuesdays and Saturdays until September 30th.

Ever visited Knock Airport? Check out my blog about it here